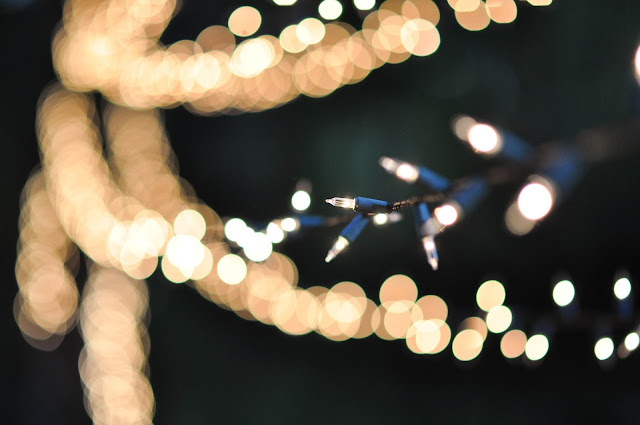 I'm so excited to finally share our full proposal story! To begin, here's a little back story... Elisha and I met when we were in high school. We "talked"for about a year, before we officially started dating. Our first Summer together was actually spent apart, while I was visiting my Dad in Houston and he was running an internship program back home. We emailed each other at least once a day & learned so much about each other! I actually printed off all of our emails and gave them to him as a gift for an anniversary. There were about 150 pages!

After that Summer I came home and we started living a dream. Over the course of two years we had incredible dates, laughed so much, shared memories, went on trips, did ministry together, learned from each other, had rough times, grew up, and were better because of one another. Looking back on where we started and who we were then, it amazes me that we've been able to grow and continue in the same direction. Eight years later and it still seems like just yesterday.

Elisha was my first and only boyfriend. There were guys who I talked to, guys who wanted to date me, but for some reason I had the mentality that if I wasn't going to marry them, then I wasn't going to waste my time. Kind of a strange way to think when you're only 16, but I knew that I was going to date to marry. When Elisha and I started to get to know each other, I knew he was going to be my guy, the one I'd spend my life with. Again, strange thinking for a teenager - or I guess more common these days.

From the beginning, we both knew we wanted marriage and that we couldn't wait to spend our lives together. After I finished my two year program, we thought it might be time. After some conversation though, I realized that I really wanted to go to college and move to Texas. That Summer he was offered a great job opportunity in Ft Worth, and I planned on attending college in the fall. Everything was lining up.

We decided that marriage while I was in school just didn't make sense. The idea of starting off fresh, with no debt, and with two jobs just seemed like the best option. So we waited. During that time Elisha was offered a Youth Pastor position in Wisconsin. He was there for over a year and needless to say, it was a trying time for both of us. Being in a long distance relationship is tough enough, but when you both have so much on your plate, it makes it even harder! I went to visit twice and spent a Summer there. This time grew us as individuals and made us stronger as a couple. Our time together was treasured and we learned to not take the other for granted; true appreciation for what we had together grew.

Elisha returned to Texas and began his new position as a Youth Pastor here in Mansfield. I graduated college and began working and helping out at our church. Our lives finally began to feel like we were on track and marriage could actually be real.

A year passed after having graduated and I was getting a bit antsy. I went through many seasons during our time together, but one thing I truly learned was patience. I knew that I knew, that we were going to be together forever & that our marriage was worth waiting for. So I waited. 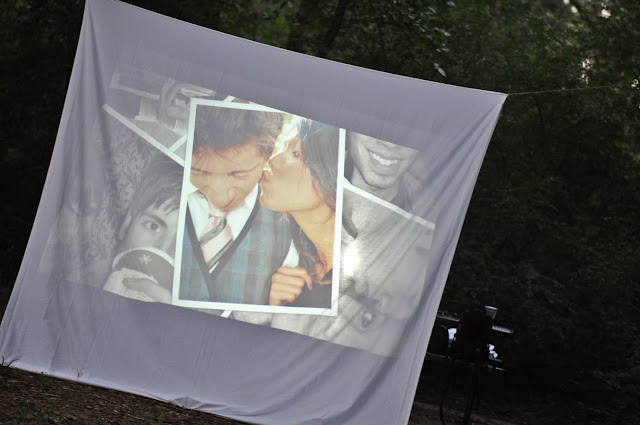 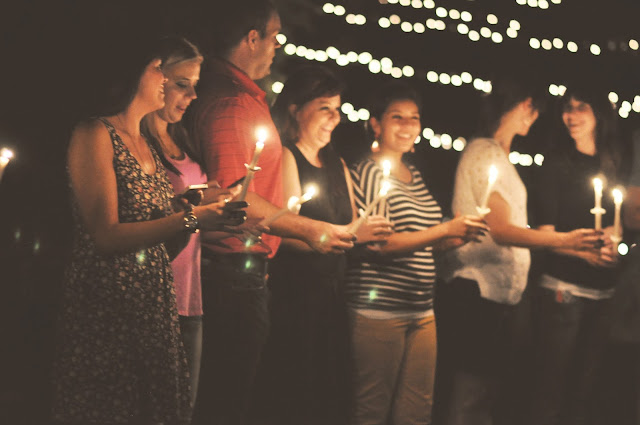 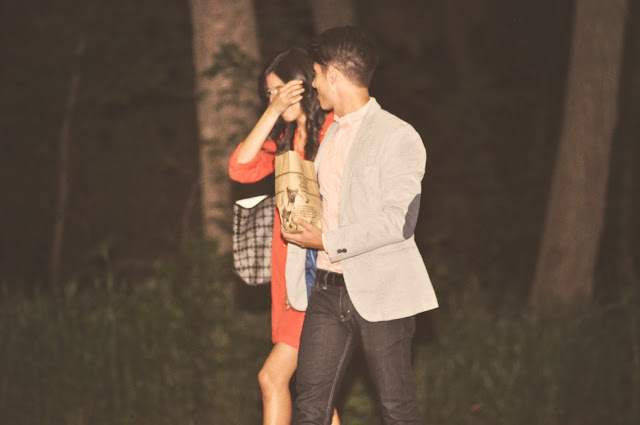 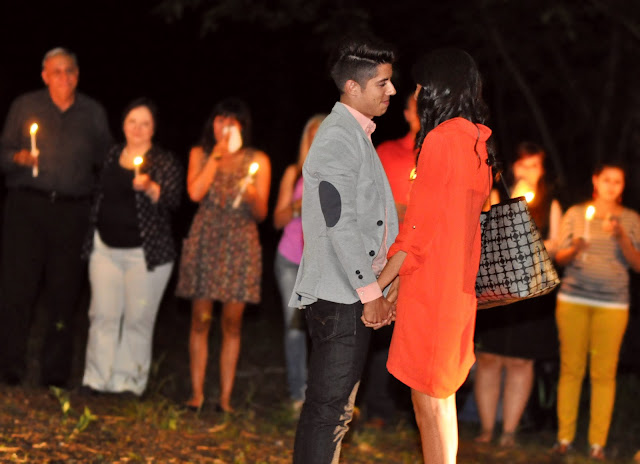 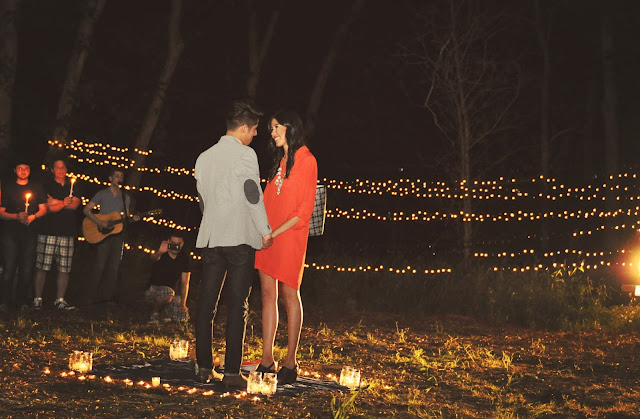 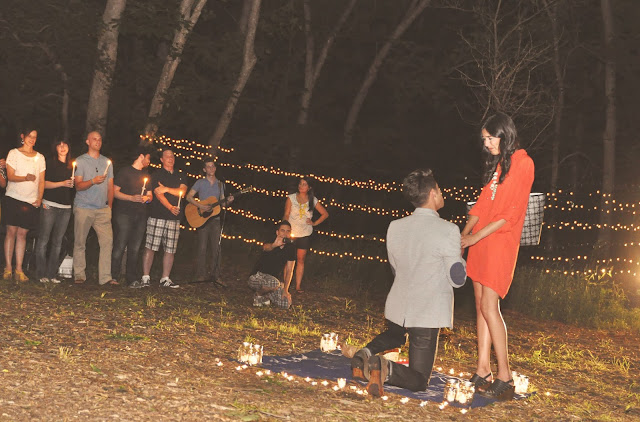 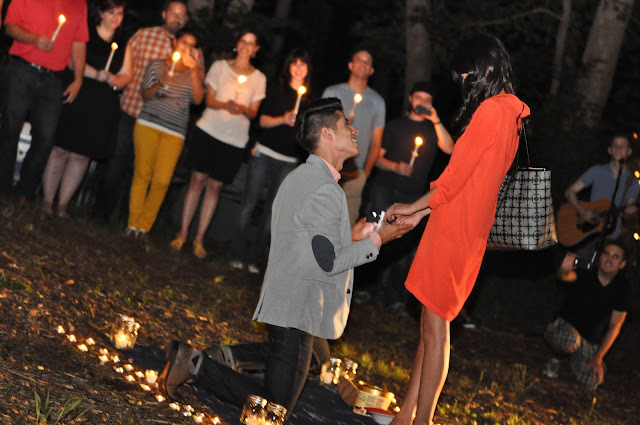 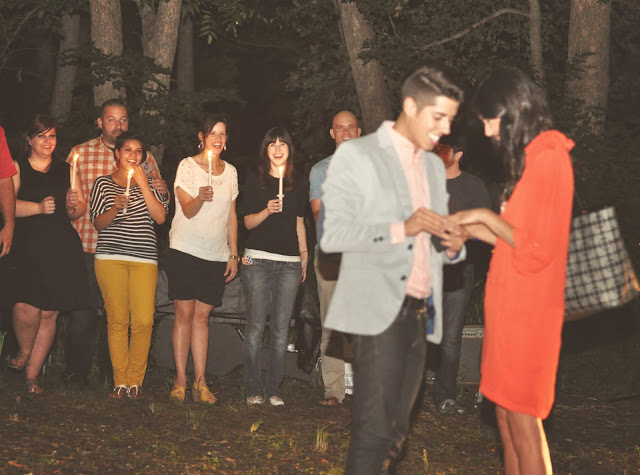 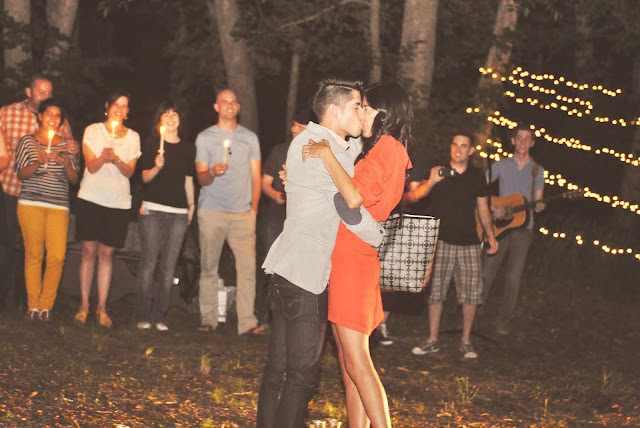 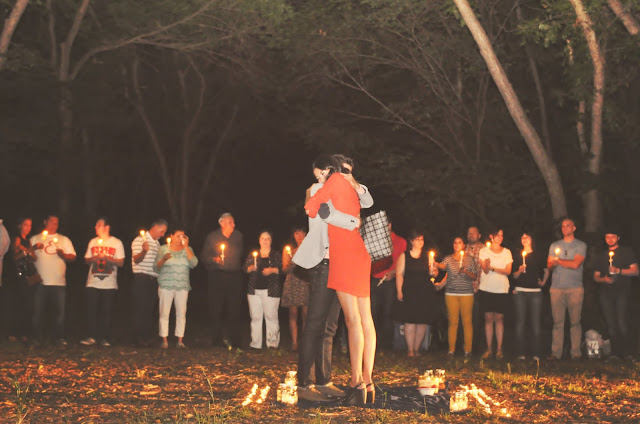 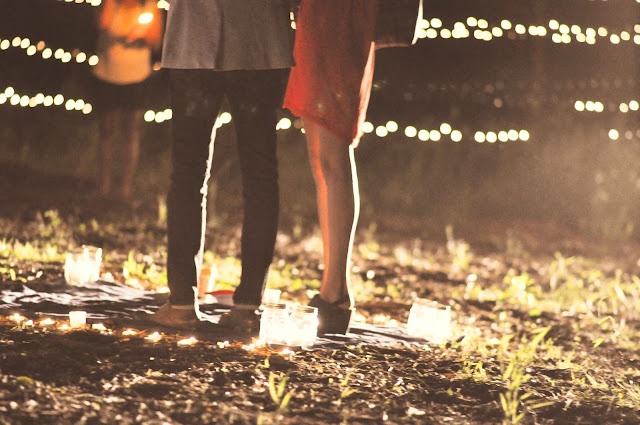 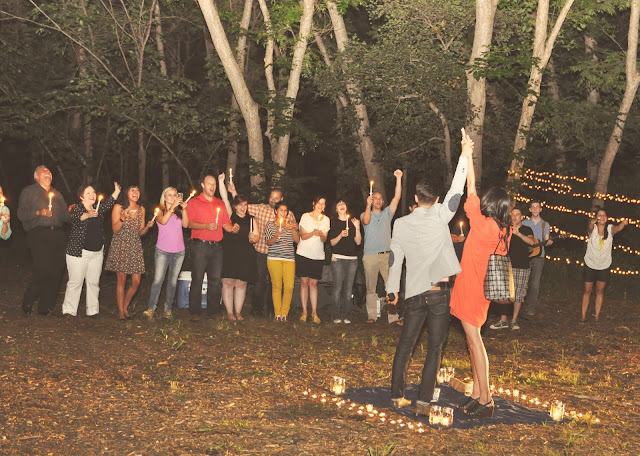 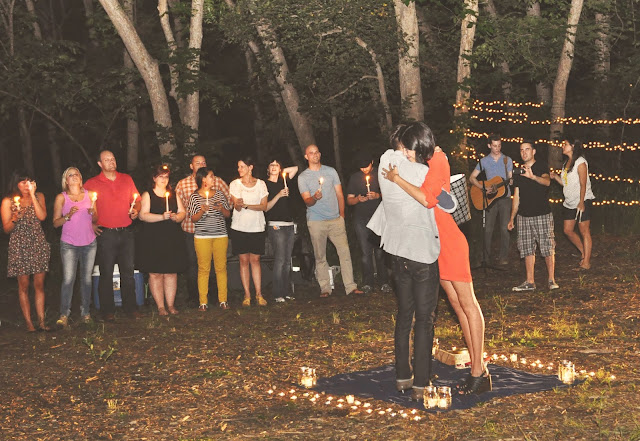 Elisha took me to eat dinner to celebrate our anniversary. He was acting a little funny, but I did't think much of it. We were on our way home and he seemed a little nervous - at this point I was hopeful, but thought, there's no way! We stopped to pick up some ice cream and he drove us into the park parking lot. I thought he was going to recreate our first date. We walked down into a a wooded area and once we turned the corner, I saw my family and some of our closest friends lined up with candles. I instantly started crying. I seriously could not even control the tears. He held my hand and walked me to the clearing. Our friend Branden was playing "I have and I always will", and Elisha was singing the words to me. When the song finished he whispered that he loved me, and I said I loved him too. This was the first time we'd ever said that to each other and we never meant it more. He got down on one knee and asked me what I had dreamt of hearing hundreds of times. I said yes (of course) and there was much rejoicing! 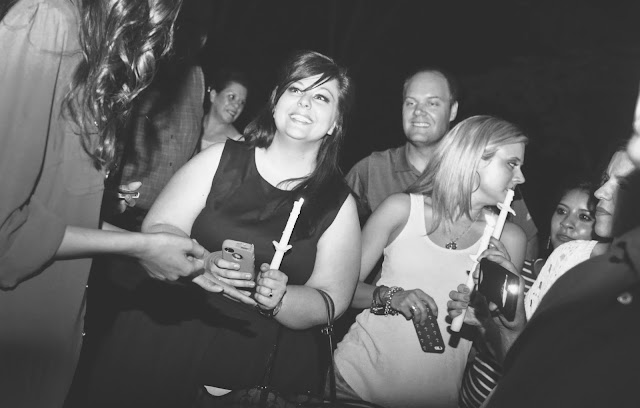 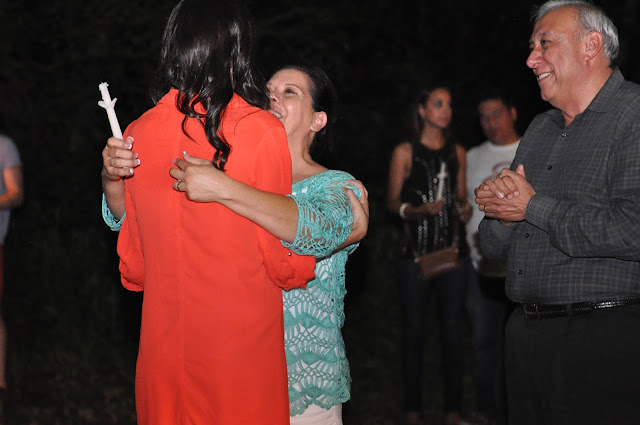 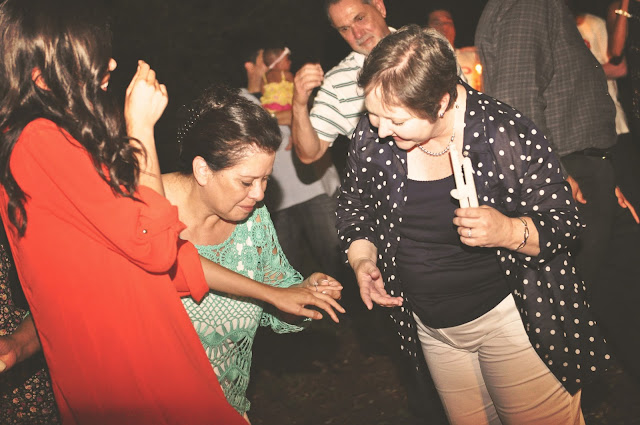 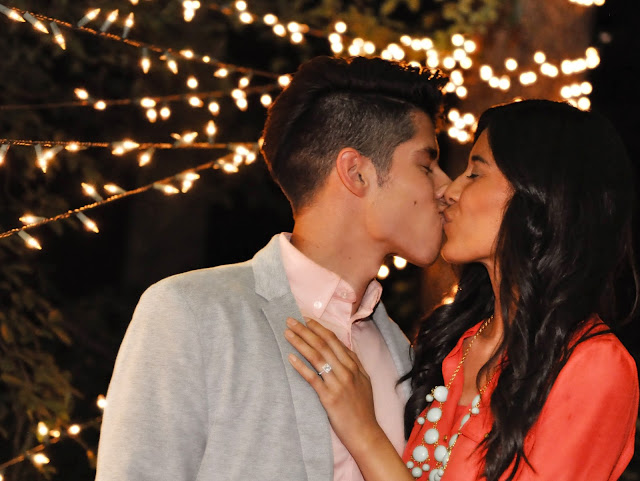 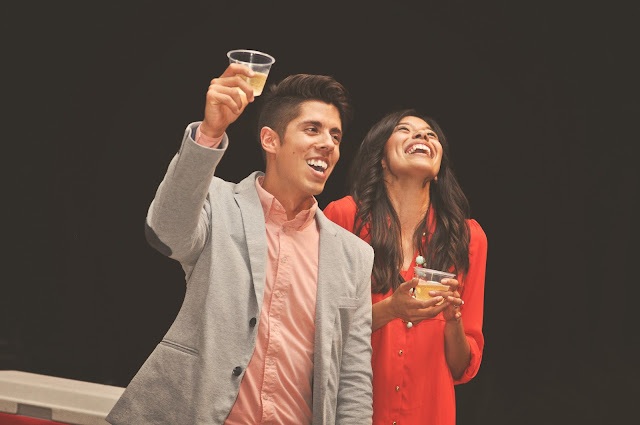 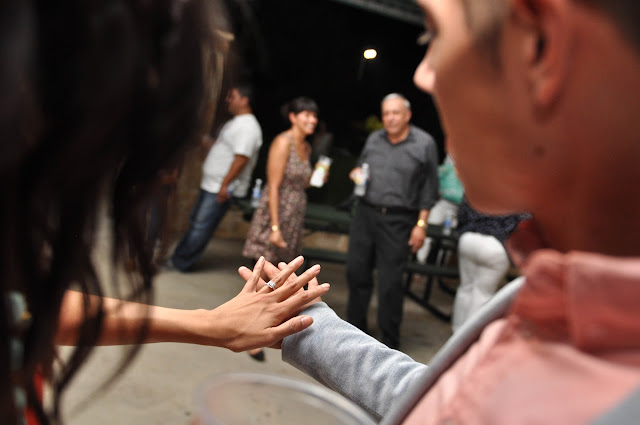 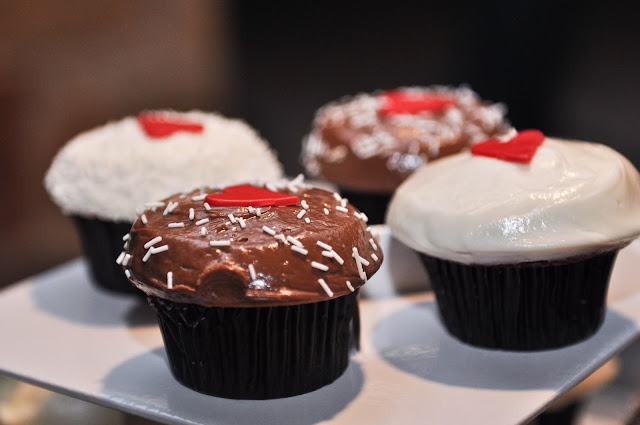 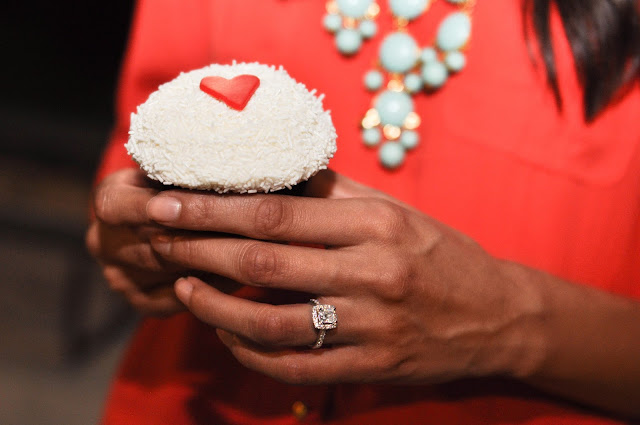 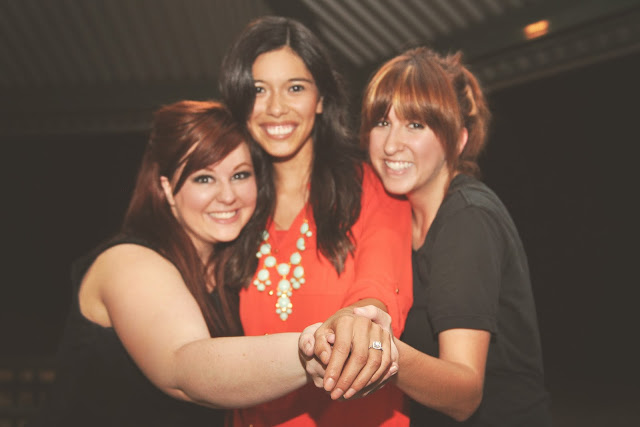 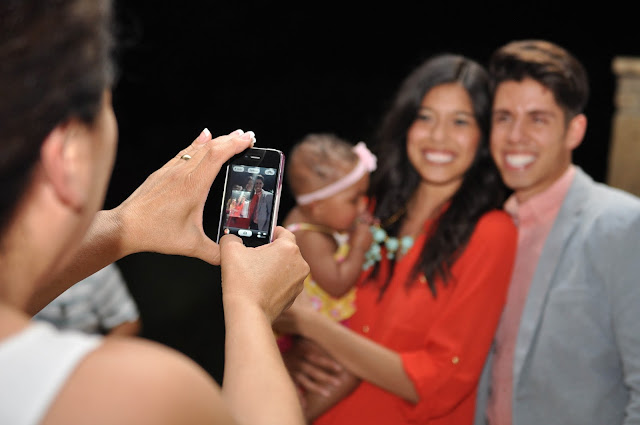 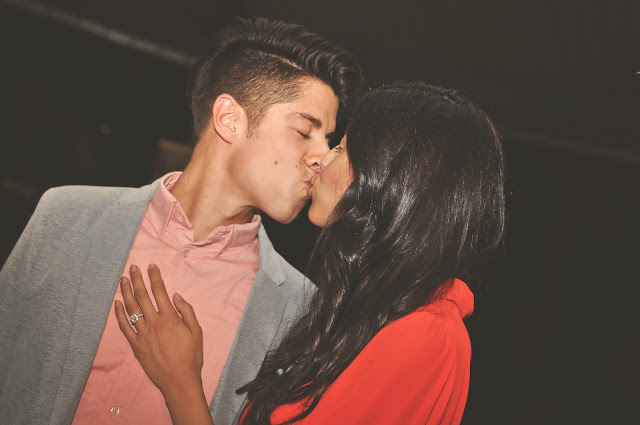 Every part of this night was perfection. From the sheet hung to show our photos through the years to the giant wall created with Christmas lights, to the people I love most being there... perfect.

It was like an instant engagement party as we made our way back up to the park pavilion to eat cupcakes and toast with cider! To be honest the night is kind of a blur because I was so in awe that this day had actually come. Even now, looking down at my ring as I type, listening to this song... I'm the happiest I've ever been. I can't wait to be his wife, and I'm excited I get to share this with all of you.

footnote: all photos taken by my sweet friend Kalli. We were so grateful she was able to capture this moment.
at 11:33 AM 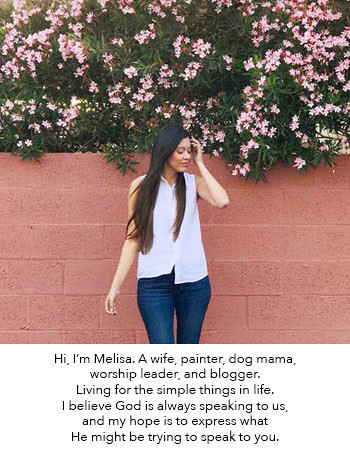 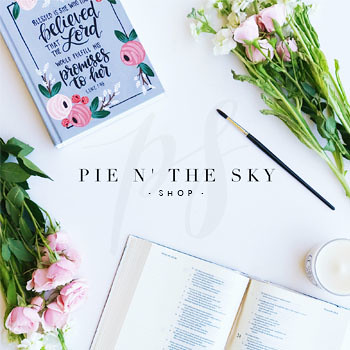